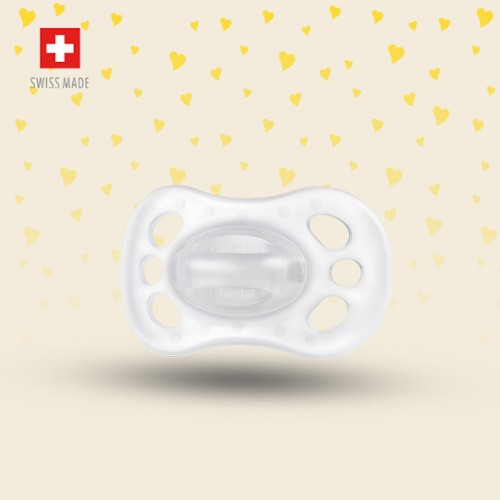 Our smallest and lightest design, specifically designed for babies under two months of age.
Extra-small silicone teat and ergonomic shape.

What makes this product so different?

At Medela Baby we understand that every baby is different and we try to provide dedicated products for every need. Our NEWBORN pacifier has been developed with experts, specifically for babies under two months of age. It is extra lightweight. The teat and the shield are extra small to fit your baby’s needs at this early stage of life.

So nothing comes between you two – but love.

OUR SMALLEST AND LIGHTEST DESIGN

OUR SMALLEST AND LIGHTEST DESIGN

Developed with experts and made with love in Switzerland

Reduce the risk of redness and skin irritation for a more gentle feel on the skin.

Included for easy cleaning and transport

Made without BPA and BPS

Safe for your baby

Yes, pacifiers can be used from birth. At Medela Baby we designed our NEWBORN pacifier specifically for newborn babies.

If you are breastfeeding, research has shown that pacifier use in healthy breastfeeding infants, started from birth or after lactation is established, does not significantly affect the prevalence or duration of exclusive and partial breastfeeding up to four months of age. 1

However, you may prefer to first offer the pacifier when you and your baby are already comfortable with breastfeeding. Read our article ‘When and how to introduce pacifier to babies?’ for more information.

When a sterilization box is included with your pacifier, it can be used to sterilize your Medela Baby pacifier in the microwave. Please follow these instructions:

Before use, remove any stickers from the box and wash the pacifier and box with warm water. Then follow these steps:

WARNING: Take extra care when handling and opening the sterilizing box. Hot steam from within the box can cause burns. Always check the temperature of the pacifier before use.

There is currently no evidence from research to support that the use of a pacifier can help babies with reflux,2 even though it is mentioned sometimes in articles as a possible help.

If babies swallow a lot of air when they are sucking on a pacifier, the air in their stomach could cause discomfort, referred to as gas. But this does not occur frequently.

The cause for colic is still unknown, but there are some theories such as an immature digestive system, lactose intolerance, allergies, or changes in the normal bacteria of their digestive system.3 Swallowing additional air during feeding can aggravate the situation. It is often difficult to calm babies during a colic episode, they cry intensely and long, often with clenched fists and curled up legs.

Doctors often diagnose infant colic based on the ‘rule of three’ 3,4

One tip to help soothe your baby is to offer a pacifier. 4 For many babies, suckling can be soothing and helps them calm their emotions.

No. The shape of Medela Baby pacifier shields has been designed according to the safety regulation EN 1400, which states how large the shield should be to prevent babies from swallowing their pacifiers. If at any time your baby should get the entire pacifier into the mouth, remain calm and gently remove the pacifier. There is no danger of choking because the air holes in the shield allow for a constant exchange of air.

Requirements for pacifiers have been recommended by speech-language pathologists . The following features should be incorporated into a pacifier’s design to help support the natural movement of the mouth muscles. 5

At Medela Baby we want our products to make every gesture more gentle, intimate and assured. Baby skin is sensitive and we strive to make all our products gentle to the skin. Sensopearls™ are smooth little nubs on the inside of the shield of all our pacifiers. They are placed on the top and bottom of the shield to reduce – in addition to the air holes – the risk of redness and irritation on your little one’s delicate skin.

At Medela Baby we want our products to make every gesture more gentle, intimate and assured. Baby skin is sensitive and we strive to make all our products as gentle to your little one’s skin as possible. These holes together with our Sensopearls™ enhance airflow and avoid skin irritation increasing child safety.

Even in the unlikely event that your little one happens to get the whole pacifier into their mouth, the holes will allow air to flow. It is important not to block these air holes, for instance by attaching cords or ribbons as it might limit airflow.

The shape and features of a pacifier are very important to help support the oral development of your baby when it is used with purpose and responsibility. Speech-language pathologists recommend that pacifiers should have a symmetrical shape with a thin shaft and a flat teat, which takes up less space in the mouth allowing for more tongue movement.

All Medela baby pacifier teats are orthodontic as they have been developed using criteria defined by speech-language pathologists. They have a symmetrical teat and a thin neck.

Symmetrical teat means the teat has the same shape on the upper and lower part.
A pacifier with a symmetrically formed teat is easily accepted, as it supports the natural physiological tongue, mouth and facial muscle movements and the natural palate growth during this period of development.

Yes. Our pacifiers are designed to fit the developmental growth stages of your baby. Your little one is growing the fastest in the first few years of life. The pacifier teat length and width of the different sizes fit the average growth measurements of the oral cavity during these developmental periods: newborn <2 months, 0-6 months, 6-18 months and 18+ months.

The pacifier should fulfill the purpose of calming your baby. When the teat size fits properly in the mouth, is not too big and not too small, this provides better support for the natural suckling movements.

The Medela baby shields were developed with an ergonomist and designed to fit children’s faces, preventing pressure points under the nose or on the chin and cheeks. Our angel-wing shape design does not interfere with babies’ breathing and facilitates smelling the comforting scent of the mother. Its light weight minimizes additional stress on the orofacial muscles.

The air holes and Sensopearls™ allow for movement of air around the face which helps reduce possibile redness or skin irritations.

Medela Baby pacifiers are made without BPA.
Bisphenol A (BPA) is a chemical component of polycarbonate (PC) plastics and is used in packaging and containers that come in contact with food products. It can also be used in the linings of canned foods and beverages and metal jar lids. Under certain circumstances, it can leach from the material.

This can occur when the container is used for heating food in the microwave, keeping food warm over long periods or when there are cracks, scratches, or damage to the material surface.

There are concerns about the influence of BPA on the hormone balance of infants and small children, which is why all Medela Baby pacifiers are made without BPA.

Medela Baby products do not contain BPS or plasticizers.
Bisphenol S (BPS) is similar to BPA. It is used in the production of plastic containers and can also be found in food and beverage can linings and various paper products. It appears to have the same health risks as BPA, with concerns about its influence on the hormone balance of infants and small children, which is why all Medela Baby pacifiers are free of BPS and BPA.

Plasticizers, also known as phthalates are used in polyvinyl chloride (PVC) plastics to improve the flexibility and durability of the material. This chemical can also leach out of the product. Some plasticizers have caused concerns about the influence on hormones in children and adults. That is why we specifically use only phthalate-free PVC in our products.

No, the limited and responsible use of a pacifier should not cause problems with misaligned teeth. Pacifier use should be limited to less than six hours per day.6 Choose a pacifier shape that supports oral development, usually signalled by the word ‘orthodontic’.

Limiting the hours of daily use and early weaning from a pacifier can help prevent misaligned teeth6. Weaning a baby from a pacifier can begin as early as 6 months. Each child’s mouth and teeth develop differently. The use of pacifiers for children older than 24 months should be a decision made by each parent, based on consultation with a medical or dental health care provider. At the latest, weaning should start by 36 months7 as recommended by pediatric dentists.

All Medela Baby pacifiers are orthodontic and designed to help support the natural movement of mouth muscles8. Their shapes come with:

We recommend to replace binkies that are in daily use every 1–2 months, to ensure a safe, hygienic condition of the pacifier and help prevent any bacterial contamination.

Before each use, pull firmly on the teat and inspect it for tears or holes. Always replace the pacifier at the first sign of wear or damage.

Replace pacifiers immediately after your little one has had any infectious disease (e.g. a cold, stomach flu).

Medela Baby packaging is recyclable, both the carton and the plastic blister and steribox are made of PP.

Our one-piece pacifier, the Soft Silicone is fully made of silicone, it is recyclable and can be handed over to recycling centers where available.

Our other pacifiers (Newborn, Original and Day & Night) are made of 2 materials (PP and silicone teat) that are ultrasonic welded and not detachable to ensure your baby safety. As they are not detachable, they are not recyclable. 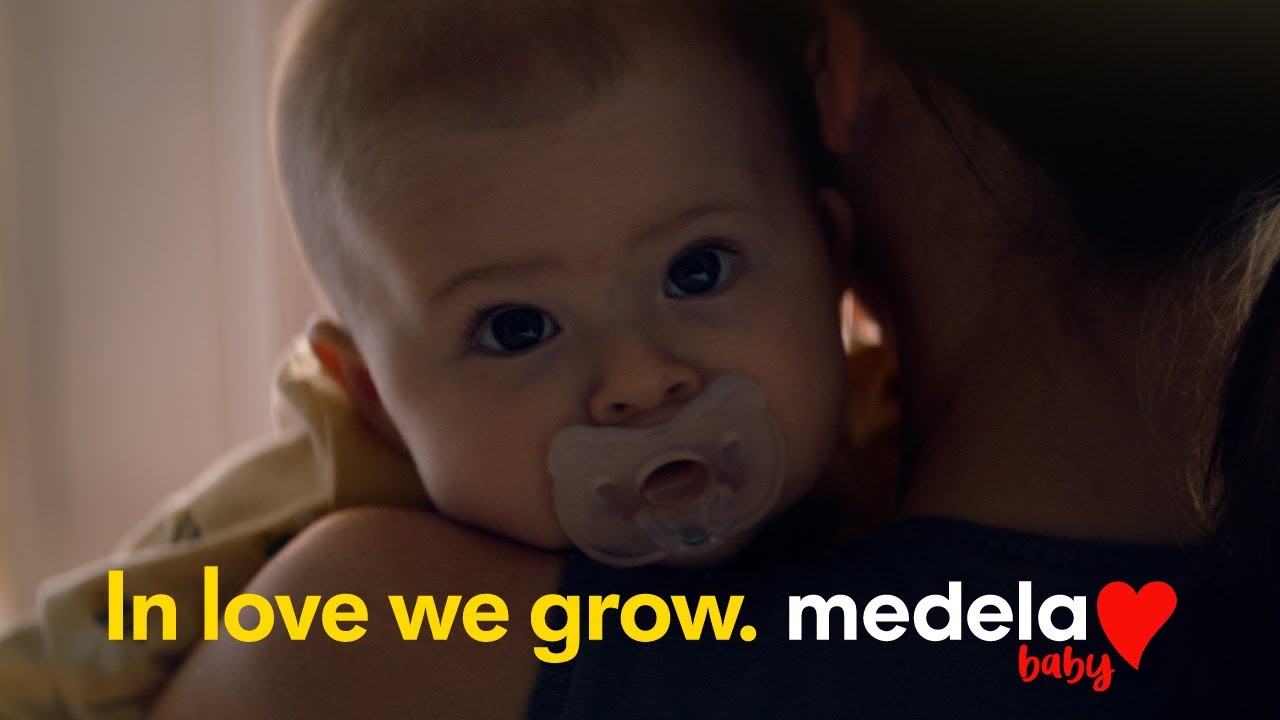 In love we grow, Medela Baby
I’m gently calming you. Or are you calming me? Introducing our Medela Baby pacifier range. 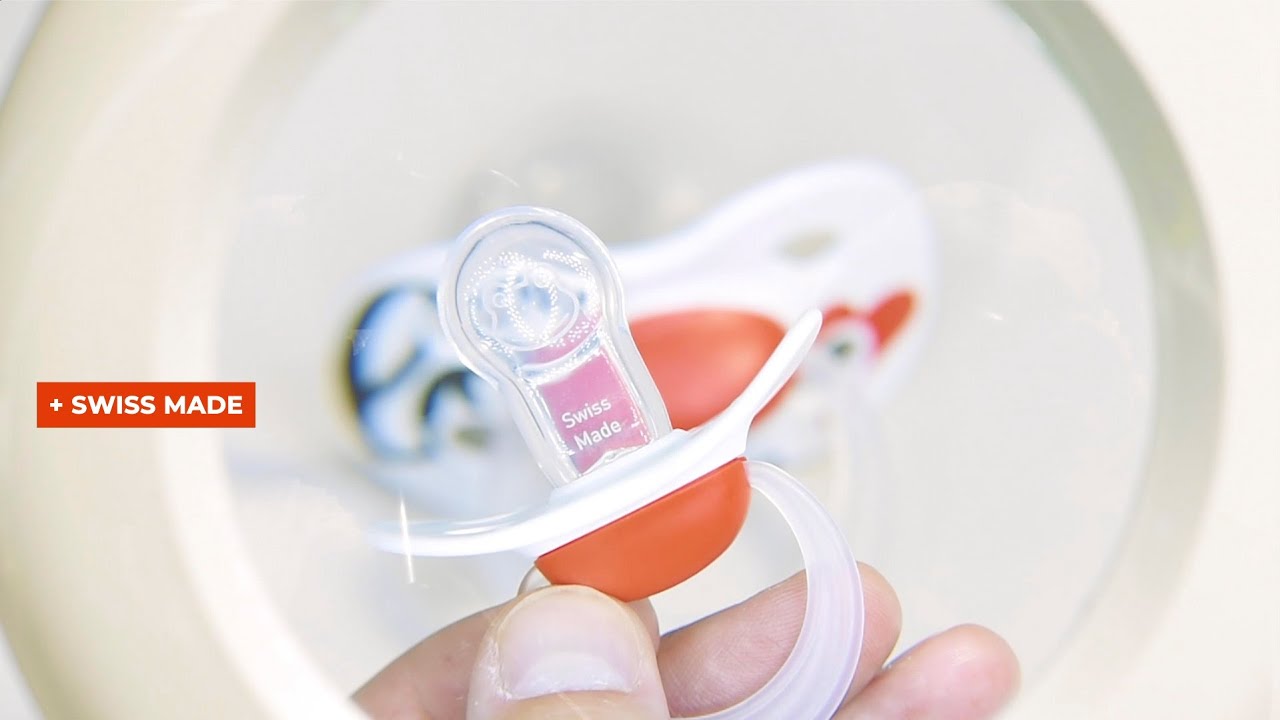 Made in Switzerland with love
Our pacifier range has been carefully crafted and produced in Switzerland by industry experts with over 85 years of experience. We strive to provide safe baby products in the best quality. Watch our video to learn more about our quality commitments.